The R320 is a great GT sim steering wheel. It's meant to attach to any direct drive wheel base or sim racing button box with a 70mm bolt pattern.

The new textured rubber grip offers zero maintenance and is slightly softer than previous versions. This makes it just as grippy as suede or leather, but will last for many years without having to be replaced or cleaned.

I have used the R320 with the Fanatec endurance button module for over a week and it's indeed a great wheel rim! The grip is perfect for someone like me with small hands, with or without gloves. With bare hands the material feels really nice, not too rough or sticky. The best part aside from quality and everything is that it doesn't block any view so I can see the dashboard better!
I do have one little complaint though: because its upper half is completely open, when turning the wheel, one of my hands has to solely rely on the grip strength, whereas with other GT/formula wheels such as the Fanatec Formula V2.5, I can use the outer side of my thumb to push the wheel. I didn't even realize this until I started using R320. I was using the Fanatec Porsche rim, and I could use my ring finger to push the wheel as it rests just under the joint, which is not possible with R320 because the grip diameter is way larger. After about ten days of using it, my grip strength has certainly improved but it's still somewhat tiring.

Purchased this wheel for racing GT class cars and it was highly recommended for use with the Fanatec button module. It fits perfect. Feels great racing without gloves, good grip and plenty of firm cushioning I wear a xxl size glove for reference.

Bought the R305 when it first came out and was my daily driver coupled with a Fanatec Universal hub on a DD2.

Also had the Fanatec Endurance button module and wished I could fit the R305 on it as I would have considered it the best of both worlds.

Along came the R320… perfect fit to the Endurance Module with a Podium hub. And if I needed a round wheel, 6 hex bolts is all I need to remove to swap the R320 with a round wheel. 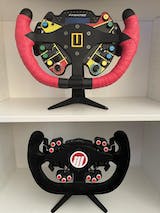 I love this steering wheel , I wish it could be a suede version of it.

I paired this wheel with my new Accuforce wireless button box and I’m very happy with the results. Glad I chose this rim and don’t see myself upgrading any time soon!

Formerly the R20 Evo, but we changed the name to the R305 for more simplified branding across all of our products. The open top 305mm...

The Turn Button Plate (BP2) is the best direct drive button box for the price. It plugs into the PC via a coiled USB cable and...

We have spent a lot of time developing the perfect sticker. The key is using a 2.75 mil gloss vinyl with air release and hot laminating...